We are proud to announce that KLEEMANN has received the gold award for the category “Waste Prevention” at the “Waste and Recycling Awards 2017” ceremony.

On December 13, 2017, at Radisson Blu Park Hotel in Athens, Mr. Theofilos Mastos (EU Project and Sustainability Researcher at KLEEMANN) received a gold award (winner) for the category “Waste Prevention” at the “Waste and Recycling Awards 2017” ceremony. The main theme of the ceremony was the celebration of the commitment of Greek companies’ to best practices for zero waste.

KLEEMANN has submitted a proposal to the awards judging committee, describing its contribution to waste prevention. Among other 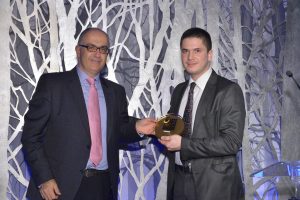 practices, the proposal described the COMPOSITION project referring specifically to KLEEMANN’s maintenance use case. COMPOSITION, makes the best of the integration of new technologies (IoT, Big Data Analytics and Decision Support Systems). KLEEMANN applies a strategy for waste and resources reduction. Through the project they investigate predictive maintenance opportunities, based on vibration measurements and controls. The aim is to and allow for real-time diagnosis of the condition of the equipment to predict and prevent future failures.

The predictive maintenance practices that KLEEMANN has invested in through COMPOSITION are expected to significantly reduce the waste generated during maintenance as well as during the production processes and also lead to more efficient use of the company’s resources.

We use cookies to create the best user experience and functionality for our users.

To the left are the categories of cookies we use and which you can control (see the table for an overview of non necessary and necessary cookies). Please note that disabling them will affect the functionality of the website.

This is an non-necessary category.

Save & Accept
Go to Top